Skip to main content
COVID-19:    WE’RE HERE TO SUPPORT YOUR OPERATION, BUT WITH STRICT GUIDELINES TO SAFEGUARD YOU AND OUR STAFF. 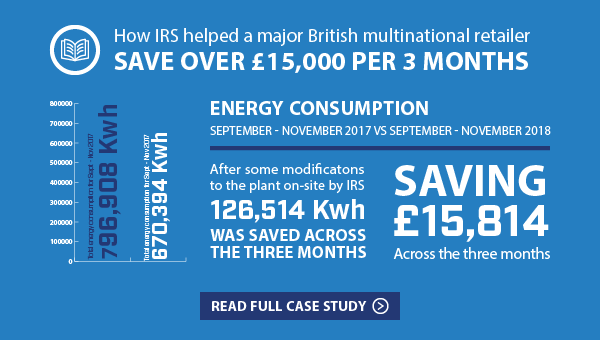 What could be more basic, a cold store holding at 3°C? So how can there be any opportunities for optimisation, bearing in mind it has been in operation for over 3 years? With an average of £35,000 a month in energy costs even the smallest percentage saving could be significant.

Fully understanding how the system operates and what is required is key. In this instance Sub metering of electrical consumption was a fantastic tool to show the before and after effect of all our actions.

The first observation was the refrigerant evaporating temperature was 3-4° lower than it needed to be, which was causing the compressors to run longer and harder. By raising this temperature, it saved on running costs and reduced on compressor wear.

A total of 90 fans serving 18 evaporators were always running, other than when on de-frost. By turning off 4 of the 5 fans when the individual evaporators were satisfied allowed enough air flow to sense temperature rise but reduce energy consumption by 80%.

The greatest power saving was to disconnect the drip tray heaters. The coldroom had originally been designed to operate at minus figures but had never operated that way. With coldroom temperatures of 3°C + these heaters are unnecessary. Simple observation that has cost the client at least £100,000 since the plant was commissioned.

In summary, we have been able to reduce their annual energy usage on site by around £60,000 per annum, which equates to an overall saving of around 17%.

Therefore, after some modifications to the plant on-site, it is evident that the electricity savings from September to November in 2017 compared to 2018 made a difference to the storage plant, based on the following data:

All this without any Capital Cost

Find out more on how we can help you save money by attending our upcoming seminar. A chance for you to discover what we can do for your business to make a valuable difference.